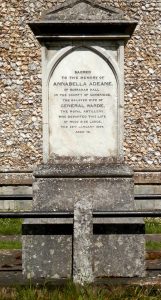 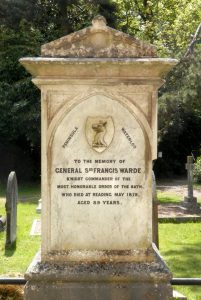 
TO THE MEMORY OF
GENERAL SIR FRANCIS WARDE
KNIGHT COMMANDER OF THE MOST HONOURABLE ORDER OF THE BATH,
WHO DIED AT READING MAY 1879, AGED 89 YEARS

SACRED TO THE MEMORY OF
ANNABELLA ADEANE

OF BABRAHAM HALL IN THE COUNTY OF CAMBRIDGE,
THE BELOVED WIFE OF GENERAL WARDE, THE ROYAL ARTILLERY
WHO DEPARTED THIS LIFE AT WOOD SIDE LODGE,
THE 28TH JANUARY 1864, AGED 72

June 18th 2015 at 11 am officers and soldiers from the 1st regiment – Royal Horse Artillery based at Larkhill, gathered at Holy Trinity Penn Street to lay a wreath in honour of General Sir Francis Warde, who fought in the Battle of Waterloo. This wreath laying mirrors the act of remembrance by the Royal Artillery exactly 100 years ago on 18th June 1915 despite WW1, and the wreath is the same design, featuring laurel, corn-flowers and red roses. The ceremony was conducted by Lt/Col Nick Launders, who spoke of the Battle of Waterloo when Wellington led a united international army from a number of European nations fighting against the ambitions of a dictator wishing to control Europe. The event was coordinated with the help of Stuart Reid of the High Wycombe branch of the RA Association.