(The author of this summary history, which was given to the present Earl Howe, is unknown. It must have been written c.1950)

The Parish Church of Holy Trinity, Penn Street, is situated in a hollow on the fringe of Penn Wood. It was built in 1849 by the first Earl Howe to the design of the Architect Benjamin Ferrey, and is tastefully executed in flint and stone. A simple cruciform building after the decorated style, it comprises a nave, South Porch, North and South Transepts, Chancel and a Priest’s Vestry on the north side of the Chancel. An octagonal tower rises above the Transept crossing, complete with shingle covered spire, from which the rain water is thrown by means of eight gargoyles. There are 300 sittings.

The church was built as a Chapel-of-Ease to Holy Trinity Church, Penn, but on 11th January 1850 a new ecclesiastical parish was formed out of the ecclesiastical parishes of Penn and Little Missenden, containing the villages of Penn Street, Holmer Green Beamond End, Mop End and part of Winchmore Hill. Christ Church, Holmer Green, was built as a daughter Church in 1894. 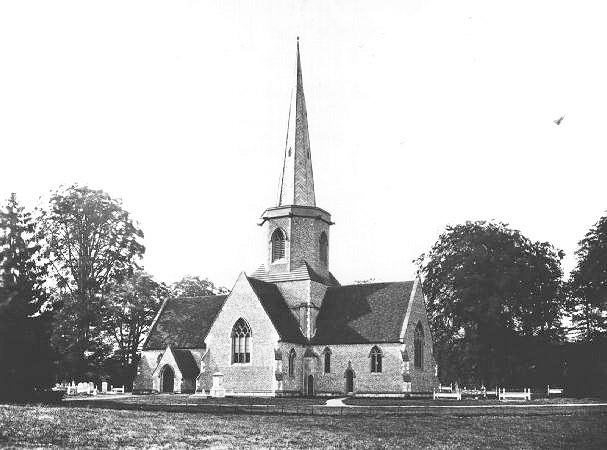 The Church was restored in 1901 by the fourth Earl Howe in memory of his father, at a cost of over £1,000, and the interior by the parish at a further cost of £150. The Church was re-opened on 12th December 1901 by the Bishop of Oxford. In November 1908 a new organ was dedicated to the memory of the third Earl Howe. It incorporated some of the pipework of its predecessor and was situated at the west end of the Nave choir. Both choir and organ were later moved to their present position in the South Transept. In 1921 the simple open screen, with a frieze of foliage in dark oak, together with some panelling in the Church, was presented in memory of Lady Evelyn Eyre and Frederick Graham Curzon by their brother, the fourth Earl Howe.

At the west end hangs a replica of Raphael’s “Transfiguration” which was presented by Earl Howe in 1905. It was formerly the altar piece of the Curzon Chapel, Mayfair.

The tower contains three bells cast in 1849 by the Whitechapel Bell Foundry.

They are hung for “chiming” only and are rung from the floor of the crossing.

In 1931, the mother Church at Penn gave its east window as a present to the daughter church. This can be seen in the North Transept, but unfortunately it does not quite fit the tracery.

The large Chancel is reserved for the use of the Howe family and contains two large stalls. On the north wall hangs the banner of Sir William Howe, who fought at the battle of Bunker Hill (1775), which formerly hung in for many years in Westminster Abbey. There are brasses in the Chancel to various members of the Curzon family, their servants and friends, and one commemoration of King Edward VII, which marks the occasion of his visit to Earl Howe, when he attended Divine service at Penn Street on 19th January 1902. A single light stained glass window on the South wall of the Chancel depicts St. Paul; a further window in the South wall of the Sanctuary portrays St. Luke and St. John. Beneath this window is a stone inscribed with the names of the first Earl Howe who built the Church and the first Incumbent and his wife. The east window is the only other containing stained glass in addition to those mentioned. the arch-braces of the roof of the Nave and Chancel rest upon stone corbels carved into various heads. Other carved figures may be found outside the Church on the dripstone terminations of the windows and doorways.

The tomb of the third Earl and his wife lies at the north-west end of the Churchyard and is provided with a separate avenue of approach and a lych-gate which was brought from another Curzon family seat at Gopsall, Leicestershire, a few years after the death of the third Earl in 1900. There are memorials to Lady Evelyn Eyre and her husband, the Fourth Earl and his two wives, and Frederick Graham Curzon and the Countess of Wilton.