The Rev. Thos. Bayley, who for many years was Vicar of Penn Street, died on the 1st inst. (1st March 1897) at Brighton, to which place he removed in 1886, having resigned his vicarage owing to failing health.  Mr. Bayley was a well-read man, and took much interest in the Church and secular literature of the day.  He was a very diligent minister of the Gospel.  In his parish he was kind and sympathetic and especially attentive to the sick, consequently much loved.  His sermons were carefully written and carefully delivered, and were full of Gospel instruction and suggestive topics.  His voice was weak, a drawback to any one ministering in the large church of Penn-street, but his congregation became accustomed to him, and could gather up his words without difficulty.  He was for many years a member of Chenies Clerical Association, and was highly esteemed by his clerical brethren.  A clerical neighbour and he went out together in Mr. Bayley’s carriage to the meetings for 20 years. 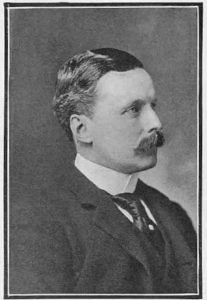 Viscount Curzon, (Earl Howe, see footnote) M.P. for South Bucks, visited the Earl Howe’s day school on Bank Holiday, upon the occasion of an interesting ceremony in connection with the retirement of the Rev.T Bayley from the vicarage of Penn Street Church. His Lordship, in presenting a testimonial to Mr. Bayley, observed that the honour thus conferred upon him was greatly enhanced owing to the fact that the present was subscribed to by members of other denominations, regardless of creed or politics. It gave him the greatest possible pleasure to be the means of conveying to Mr. Bayley the heartfelt regard and esteem of such a large number of friends present – for he certainly must call them friends having been brought up amongst them during nearly the whole of his lifetime. the pleasure was also mingled with a large amount of sorrow, caused but the prospect of their so soon losing the presence of their respected and beloved Vicar, who had made himself so devoted to them by his self-sacrifice in every good deed and work. The parish was losing one whose place would not be easily filled, and whoever his successor might be, he (his Lordship) earnestly hoped he might prove himself worthy to follow in the steps of such a good man. In the name of the subscribers he begged to hand Mr. Bayley the token before him as a slight acknowledgement of past services and present esteem. (Applause.)

The testimonial consisted of a silver Queen’s reading lamp, and a silver fish carver and fork, upon which was engraved, “Presented to the Rev. Thomas Bayley by his parishioners as a mark of esteem held by them at the close of twenty-five years’ faithful ministry at Penn Street Church. April 27th, 1886.” 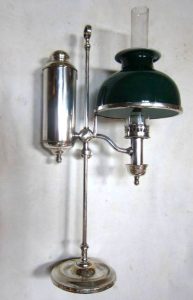 Mr Bayley, who was visibly affected, begged to thank all friends who has subscribed to the present before him, and also his Lordship for his great kindness in thus coming forward at great personal sacrifice to present the testimonial to him. Words failed him to express all that he felt at that moment. On looking back for a quarter of a century during which he had been amongst them he saw many changes; friends who were with him at the commencement of his ministry were gone to the grave and another generation had taken their place. He felt extremely happy in seeing such a large gathering assembled to testify the appreciation of his services; and he assured them all that when at some distance from them, and sitting in the light of the excellent lamp they had been pleased to present to him, he should should ever think of all his kind friends at Penn Street to the end of his days, whether that time should be long or short. He should also ever think of the loved surroundings of the place, especially the dear old Church, with its tall spire, seen from such great distance, peeping from the wood and pointing to the skies, where he sincerely hoped he should meet all his friends never to part again. He could not trust himself to say more words, but he heartily all those who had in any way contributed to the present now in his hands. (Applause.)

Mr Widdowson then thanked Lord Curzon for his great kindness in attending there that day; and begged in the name of the Committee to propose a vote of thanks to him. This was seconded by the Vicar and carried with acclamation.

Lord Curzon briefly replied, and apologised for the absence of Lady Curzon, who would have been exceedingly pleased to attend and show the great respect she felt for Mr. Bayley, but owing to an engagement at Slough of a similar nature to that in which they were engaged, she was prevented from attending. Ringing cheers were given for his Lordship at the close of the meeting (as also on his arrival) which were repeatedly acknowledged by him.

A public tea followed the meeting, when about 140 friends sat down to an excellent repast provided by Mr. Eggleton. The gathering was in every way a success, and was thoroughly enjoyed. A sacred concert was given in the evening, when Mr. Widdowson, in the absence of the Vicar from fatigue, presided. The admission being free, every available seat was occupied and standing room was taken advantage of where possible. The singing was accompanied on harmonium by Mrs. Winter and Miss Widdowson, who greatly assisted the various vocalists. The following was the programme, which was given throughout with great success, the pieces “Rest,” and “Abide with me,” being encored; but for the time of the evening, other as deserving would doubtless have shared the same fate; Chorus, “Children’s voices;” solo “Resignation;” Mr. Winter; trio, “How beautiful upon the mountains,” Miss Wingrove and Misses Copestake; solo, “Mark the vesper bells,” Miss Norman; duet, “Rest,” Miss and Mr. Widdowson; solo “Abide with me,” Mrs. Winter; solo, “The little hero,” Mr. Winter; anthem, “Jerusalem my happy home;” solo, “The better land,” Miss Widdowson; solo, “The crowded harbour,” Miss Boug; recitation, “The life-boat,” Mr. Jerrold; trio, “Ho! every one that thirsteth,” Mrs. and Messrs. Winter; trio, “My bud in heaven,” Miss Dean, Messrs. Laurence and Howell; duet, “Leaning on Jesus,” Mrs. Widdowson, jun., and Hickson; duet, “Glory to Thee my God this night,” Mr. and Mrs. Winter; “National Anthem.” Too many thanks cannot be give to the ladies of the hamlet for the untiring zeal displayed in decorating the Schoolroom, and assisting in numerous ways.