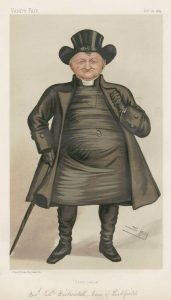 Edward Bickersteth the first Vicar of Penn Street, was born in Acton in Suffolk, into an ecclesiastical family: his father was the Rev John Bickersteth, sometime Rector of Sapcote; and his brother Robert was a future Bishop of Ripon. He was admitted to Trinity College, Cambridge, in 1831, and migrated to Sidney Sussex College two years later, graduating B.A. in 1836. He also studied at Durham University in 1837. Ordained Deacon late 1837, he began his career as curate to Arch-deacon Vickers at Chetton, nr. Bridgnorth in Shropshire, and ordained priest January, 1839, curate at Holy Cross and St. Giles, Shrewsbury Abbey. He held incumbencies at Holy Trinity, Penn Street, 1849 – 1853, and St. Mary’s, Aylesbury, before being appointed Archdeacon of Buckingham, and appears here on an 1861 photograph of Rural Deans and Archdeacons, (Edward Bickersteth 26). In 1866 he was nominated an honorary canon of Christ Church, Oxford.

In 1875, he was appointed Dean of Lichfield. His chief achievement as Dean was the restoration of the west front of Lichfield Cathedral, which was begun in 1877 and completed and dedicated on 9 May 1884. He resigned just a few weeks before his death on 9 October 1892. 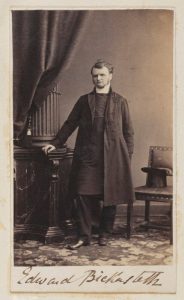 BICKERSTETH, EDWARD (1814–1892), dean of Lichfield, born on 23 Oct. 1814 at Acton in Suffolk, was the second son of John Bickersteth (1781-1855), rector of Sapcote in Leicestershire, by his wife Henrietta (d. 19 March 1830), daughter and co-heiress of George Lang of Leyland, Lancashire. Henry Bickersteth, baron Langdale [q. v.], and Edward Bickersteth [q. v.] were his uncles; Robert Bickersteth [q. v.] was his brother. Edward entered Sidney Sussex College, Cambridge, graduating B. A. in 1836, M.A. in 1839, and D.D. in 1864. He also studied at Durham University in 1837. In that year he was ordained deacon, and in 1838 was curate of Chetton in Shropshire. In 1839 he was ordained priest, and became curate at the Abbey, Shrewsbury. From 1849 to 1853 he was perpetual curate of Penn Street and rural dean Amersham, in Buckinghamshire. In 1853 he became vicar of Aylesbury and archdeacon of Buckinghamshire. In 1866 he was nominated an honorary canon of Christ Church, Oxford. He was select preacher at Cambridge in 1861, 1864, 1873, and 1878, and at Oxford in 1875. In 1864, 1866, 1869, and 1874 he presided as prolocutor over the lower house of the convocation of Canterbury. During his tenure of office an address to the crown was presented by the lower house requesting that a mark of the royal favour should be conferred on him, but nine years elapsed before he was installed dean of Lichfield on 28 April 1875. As prolocutor he was ex officio member of the committee for the revised version of the Bible, and he attended most regularly the sittings of the New Testament section.

His chief achievement as dean was the restoration of the west front of Lichfield Cathedral, which was commenced in 1877 and completed and dedicated on 9 May 1884. He resigned the deanery on 1 Oct. 1892, and died without issue at Leamington on 7 Oct. He was buried at Leamington on 11 Oct. He was twice married : first, on 13 Oct. 1840, to Martha Mary Anne, daughter of Valentine Vickers of Cransmere in Shropshire. She died on 2 Feb. 1881, and on 12 Oct. 1882 he married Mary Anne, daughter of Thomas Whitmore Wylde-Browne of The Woodlands, Bridgnorth, Shropshire. She survived him.

Bickersteth, who was a high churchman, was the author of numerous sermons, charges, and collections of prayers.