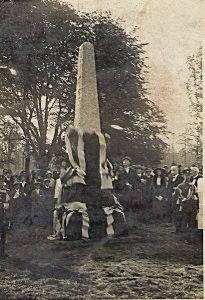 Unveiled: 11 June 1922,
by: Private Eric Randall
Dedicated: 11 June 1922,
by: Rev A Browning
During his long service Vicar of Penn Street and Holmer Green, the Rev Arthur Browning recorded many aspects of the life in the villages in his monthly newsletters.  The fund-raising for various projects during World War I is documented, as well as the sad news when a local man was killed.

In the December 1918 Newsletter, he records “The news of the signing of the Armistice on Nov. 12th, St Martin’s Day, sent a thrill of joy throughout the country; …” and in January 1919 mentions a war memorial.

Several schemes were being proposed in the district and preliminary meetings were held in Penn Street on 28th December and in Holmer Green on 6th January 1919 to consider what the local people wanted. It was unanimously agreed to erect a granite Cross in each Churchyard with the names of the ‘fallen’ engraved on the base, with a suitable inscription, and to raise at least £100 for this enterprise in each village.

In June 1919 the Vicar tells us that “it has now been provisionally arranged to place a memorial tablet in the Parish Church to the memory of those fallen in the war from Penn Street, Woodrow and Mop End.”  After paying for this, any surplus money could go towards a Recreation Room that could be used as a kind of club for the many young men, including those returned from the Army, living in the village.  Money was starting to come in and some of the young men organised a house-to-house weekly collection.  A social in May raised £5 from admission and refreshments, all of which had been donated.

Holmer Green residents were raising money and in July up to nearly £40 had been donated.  Some people were paying by weekly and monthly subscriptions so on the whole the response had been gratifying.  Rev Browning urged upon all Holmer Green people the desirability of contributing something towards this fund. “However liberally we may respond to outside appeals we ought not to do so at the expense of our own memorial.”

In May 1920, it is reported that a design had been chosen and a site in the Churchyard given by the Vicar for a memorial in Holmer Green.   More donations were received to cover the cost.  In October the faculty for the erection of the War Memorial Cross in the Churchyard was received and work started soon after by Mr G Darlington of Amersham.  (The bound volume for 1921 is missing and I think this is when the Holmer Green Memorial would have been completed and dedicated.  Has anyone any information about this?)

In the December 1920 Newsletter, a meeting in Penn Street Schoolroom it was agreed that the most suitable place for a memorial would be on ‘The Piece’, close to the road, if Lord Howe consented. 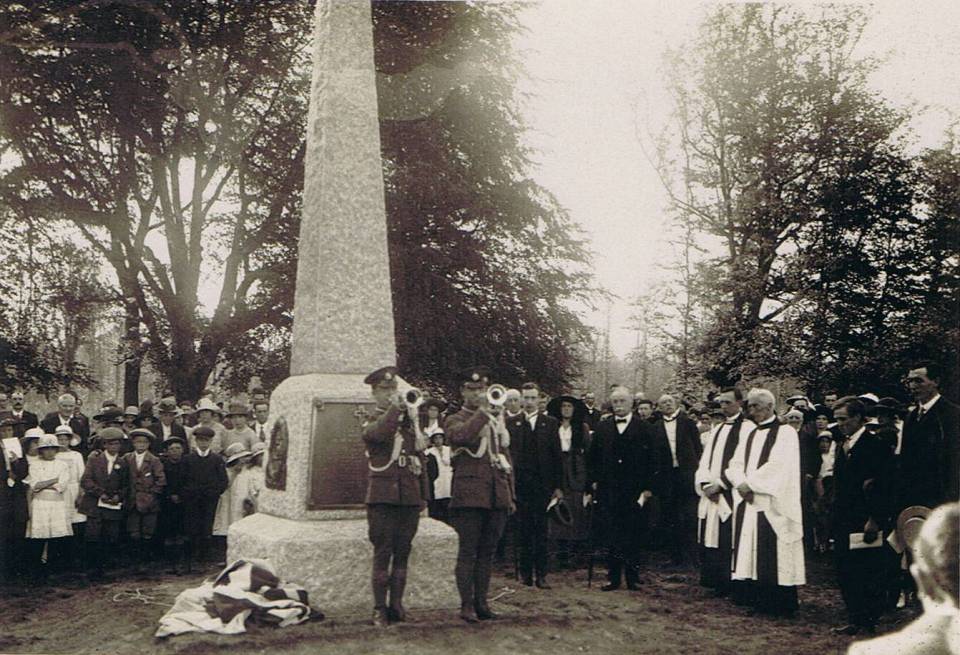 In July 1922 it is recorded that on 11th June 1922, “A large number of people – estimates varied between 700 and 1000 – assembled on the Village Green for the Unveiling and Dedication of the War Memorial Festival of the Parish Church (in Penn Street).” Penn and Tylers Green Brass Band accompanied the hymns, and “by the kindness of the Commanding Officer,” two buglers came from Halton Camp to play the Last Post and the Reveille at the end of the ceremony.  Earl Howe gave an address and invited Private Eric Randall, who lost a leg in the war, to unveil the memorial. At the conclusion of the Ceremony about 350 people packed in to the Parish Church for Evensong, when the collection was given to St Dunstan’s. 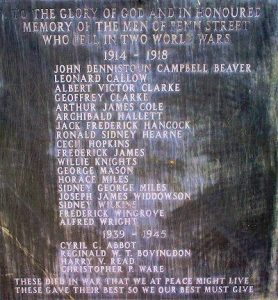 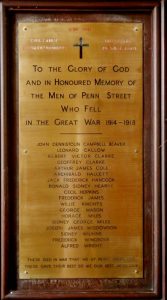 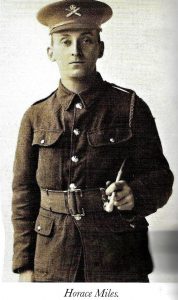 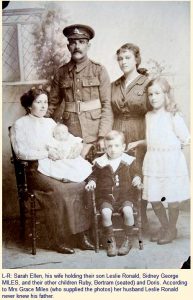 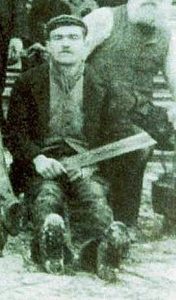 Much of the information above is from June and Peter Underwood’s comprehensive website Buckinghamshire Remembers,  and Commonwealth War Graves Commission website.